In late 1988 Rick Smith, longtime Register supporter, proposed a "safety inspection" to be offered to all members of the Register who were attending the upcoming GOF.

"I do not have in mind a gas station variety safety inspection. Anyone who can't check their own lights, horn, and wiper should not be given a license, let alone a T series car", said Rick.

Instead he proposed a check of items that were special to T series cars. The first portion of the check would be done on the ground and cover the engine compartment, door latches, gas tank seals and so on.

From there the car would be put on a lift of some type in order to gain access to the undercarriage of the car. Clutch linkage, brake hoses, general wiring, etc. would be checked while the car was on the lift. Over 30 items would be checked on each car. 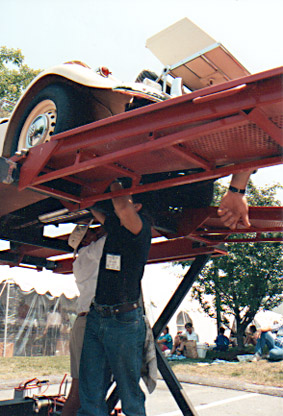 The Register endorsed Rick's idea and decided to implement it at the next GOF. After a quick run through with the local club to shake out any issues, Rick was ready to run the first Safety Fast inspection. With a set of ramps at the ready, he officially held the first Safety Fast Inspection at GOF Mk 48 held in Nashua, NH in 1989. In 1990, Paul and Annette Allen joined Rick as inspectors with Annette organizing the participants, Paul doing the ground checks and Rick manning the cars on the ramps. Today with the portable lift purchased by the Register and the help of many other Register volunteers, they continue to perform the Safety Fast sessions at one GOF each year.

Each item checked is assigned a result in one of four categories: Good, Serviceable, Needs Work and Unsafe with each category having a point value. Points are tallied up after the Safety Fast check and the owner of the car is given his or her result sheet so they can use it as reference when they are making repairs to the Serviceable or Needs Work items. If an item is listed as "Unsafe" it is a notice to the owner that they need to address the issue quickly - and probably before they leave for home. We are lucky that there are so many knowledgeable and willing MG owners around at a GOF that there are very few problems that can't be fixed right on the spot. There have been a few cars that required repairs immediately - brake lines fell off when touched and a front end A arm with 6 bolts missing! They were kept on the lift until the repairs were made.

In the early days many cars failed... only 2 of 20 cars passed at one early Gathering. But as the popularity of the program grows - the idea has been used world wide now - and hundreds of cars have been checked, the owners are making sure that the items on the Safety Fast list are attended to before they leave the driveway for that next drive.

If you've never seen a Safety Fast inspection we have a small video showing part one of the process. This is our first attempt at capturing this on video so it may be a bit rough.