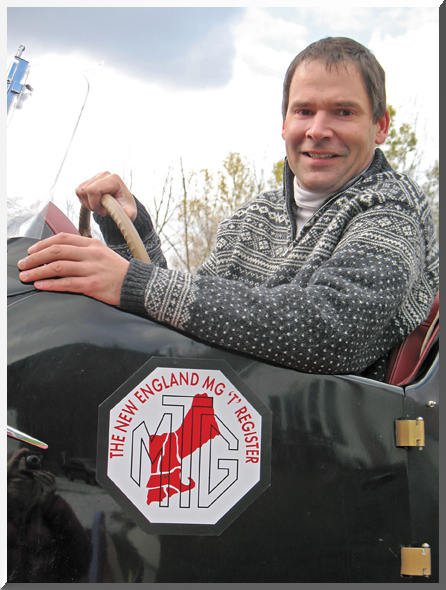 I am very pleased to introduce David Sander to the Register. If you have been attending our Gatherings of the Faithful anytime during the past thirty-two years, then you have probably met David already. His first one was in 1979 at Sturbridge, Massachusetts when he was just nine years old. Since then, David has only missed two GOFs. David’s parents, Bill and Jan have been car enthusiasts forever... Bill recently confessed that he has 31 cars registered, taxed, and road-ready... and there are several M.G.s in the collection. Back in 1979 Jan was dusting off their Triumph at a car show in Northern Vermont. Parked next to them was an M.G. TD... you guessed it, Frank Churchill. Jan admired the TD and that’s all it took for Frank to extol the joys of owning such a motorcar as well as lauding the benefits of belonging to The New England MG T Register. Frank hooked the Sander family good as they now have the following M.G.s: 1947 TC, 1953 TD, 1955 TF, and a 1957 MGA... all restored by David.

Rosalie is David’s wife, and they have two sons, Sean and Will. The whole family supports David and enjoys being involved in the hobby. I often think back to my stint as chair and realize how much Ann, Leesa, and Erik contributed to the success of the Register.

Taking those phone calls and getting a person’s name and address correct so an application could be sent out was extremely vital to the growth of the Register.

David graduated from Johnson State College in Vermont and now works at a community mental health organization. He works with school-aged children with emotional and behavioral problems and is a supervisor at one of the residential facilities in East Montpelier, Vermont.

Anyone who has seen the cars David has restored just has to be impressed. He had no formal training other than that great school of experience. He maintains that the great teacher is getting in over his head and then working his way out of it. He has tackled everything from complete restorations including major engine and body rebuilds to minor maintenance. His work was recognized by the Vermont Automobile Enthusiasts Club with the coveted VAE President’s Restoration Award in 1987 and 2011. His cars always are appreciated wherever they are shown.

The most difficult restoration for David has been the rebirth of Frank Churchill’s TD. First was the emotional hurdle as Frank had been a very long time personal friend of the Sander family. Any Register family with kids knows how Frank felt about children and it goes without saying that Frank and the Sanders were close. Of course, the car was extensively damaged and the task of bringing it back to the state that showed Frank’s love for the TD as well as David’s love and respect for Frank took untold hours. On top of that, David did extensive research on the car’s history that resulted in an outstanding presentation at this year’s Concours d’Provenance. I certainly had mixed emotions about seeing the car again, but I know that the right thing has been done. Frank’s car, #2, lives on. It will always be Frank’s car, and I feel in my heart that’s what Frank would have wanted.

You may be wondering what other attributes David possesses that qualifies him to take over the leadership role in the Register. Simply put, the Register is a major priority in his life. I don’t mean #1 or #2, but I do mean that the Register has to be #3. Leading the Register is not a sometime thing. There is plain old get-your-hands-dirty-grunt work. There are phone calls to make and take, emails to respond to, plans to be made, feathers to be smoothed, supporters to be prodded, encouragement to be given, as well as praise and thanks to deserving souls.

In addition to priority, David has passion and vision. The passion is for the cars, yes, but beyond that it has to include the organization and the people. I’m pleased to report that David also has expressed early on several sound visions for the Register and its future.

He wants to encourage expanded programs at the Gatherings to include more activities that will keep people coming back GOF after GOF. David has a real concern about the discrepancy between the number of cars we have registered and the number of active members. He feels that there are actions we can take that will encourage inactive folks to become active once again. One suggestion is a technical forum on our web site and another is an expanded activity calendar.

David has his priorities right along with vision and passion. Now all he needs is YOU.

You have all supported me in the past along with the inspired leadership of Hank Rippert and Charlie Searles, our two most recent chairs. Now is the time for all of us to pull together and send the Register onto a second 50 years of outstanding M.G. enjoyment.