Five Decades and Going Strong with an eye to the Future . . . Celebrating our 50th Anniversary in 2014 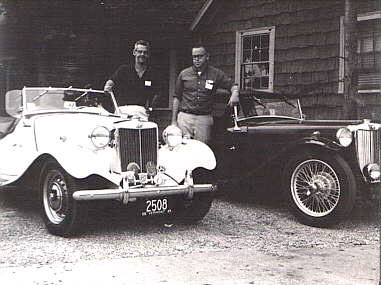 A young man once had a TC and a dream. That man was Dick Knudson and his dream was to form a U.S. based Register of T-Series MG's, patterned after the T Register of the MG Car Club in the UK. Spotting a photo of Frank Churchill's TD in the December 1963 issue of SAFETY FAST, the MG Car Club (MGCC) magazine, Dick felt he might have found a kindred spirit. He outlined his ideas in a letter to Frank in the summer of 1964 and asked if the plan appeared to have merit.

Recognizing the lack of, and need for, an organization having as its primary interest the welfare of the T-Series MG, Dick and Frank continued discussing the Register concept, feeling there might well be other owners in New England that would welcome an association where technical and spares data and the companionship of fellow owners could be shared. The response to the announcement of the Register's existence far exceeded the expectations of the founders and it became apparent that there were owners in all parts of the country who felt a need for this organization. By the summer of 1965, the Register was officially one year old and already had 120 members. Dick assumed the role of Chairman with Frank taking on the Vice Chairman position.

And now it was time to get all of those enthusiasts together. Dick Knudson volunteered to organize a "Gathering of the Faithful", which drew over 40 people and 21 cars to Meredith, NH. The first Gathering was so successful that it was decided to hold two of them each year. It is interesting to note that it was at GOF Mk1 that Dick Knudson and Frank Churchill first met face to face. Over the years GOF's have been held from Canada to Georgia. Each GOF venue offers something new and exciting for our members to see and do.

The Register is regional only in name. Today the roster has members throughout the United States, Canada, England, Europe, Africa, Australia, New Zealand, Japan and South America. All the members are linked by their affection for the cars and the Register's bimonthly magazine, The Sacred Octagon and the Registers website. Register members have formed Chapters in many regions and the Register supports and encourages the growth of local Chapters. The Register exercises no control over the internal operations of local clubs, their events or fees. The only Register requirement for membership in a local chapter is membership in the Register as well.

Our Chairmen through the years

Dick Knudson was the first chairman of the New England MG T Register and under his direction the Register continued to grow each year.  Dick's background is in education. He was an English professor at the State University College at Oneonta for many years and he is also a published author. His book "Illustrated MG Buyer's Guide" is known world wide as an excellent reference for those looking to purchase their first MG In addition, to MG's Dick has a passion for hot rods, TSD rallyes and a good story. He is currently serving as the Priest at Church of the Holy Spirit in Schenevus, NY. He continues to be a guiding force in the Register.

During 1996 Dick indicated that he would like to move out of the position of chairman. Dick contacted long time member Hank Rippert to ask if he would consider assuming the position of Chairman. Hank had over twenty-five years of service to the Register and seemed an excellent choice. The Board agreed and appointed Hank as Chairman in 1997.

Hank had previously served the Register as Awards Chairman coordinating the various awards that the Register bestows at the GOF. He organized two very exciting Register trips that took members from coast to coast ending in Canada and a trip on the scenic Skyline Drive and Blue Ridge Parkway. Members are still talking about the great times had on both of those trips. Hank has owned MGs for many years and still drives a "tastefully modified" TD, which he has owned for more than 40 years. While no longer chairman, he still is very active in the T Register and provides support to all who ask.

In 2005 Hank suffered a major health setback just prior to the yearly meeting thus ending his term of Chairman. He announced his resignation and instructions for a Committee within the Board to begin an immediate search for a new Chairman.

In June of 2005 the committee returned with one name, Charlie Searles of Pittsford, NY as their selection. Charlie accepted the position in June and continues to serve as the third Chairman of the NEMG T Register.

Charlie is also a longtime supporter of the Register. His background is in education, spending 34 years in public school systems. After leaving the education field, Charlie and his wife Irene have started down a new path as restaurant owners. His background in the hospitality industry and education has brought a new dimension and understanding of the needs of the Register members.

Charlie purchased his first MG in 1973 - a car he still owns and drives today. He also has two other MGs that he acquired in 1976 and 1985. The TF and TC are fine examples of the breed.

Charlie has made two promises to the Register members. One is to listen and be responsive to member's issues and to keep the Register strong, vibrant and financially healthy.

In mid-2011 Charlie informed the Board that, for personal reasons, he would be stepping down as Chairman. The Register believes that family comes first and started the search for a new Chairman to take over the position. That search was conducted over the rest of 2011 and resulted in long time Register member, David Sander, being offered the position of Chairman. David accepted the challenge and took office in 2012.

David's first GOF was in 1979 at Sturbridge, Massachusetts when he was just nine years old. Since then, David has only missed two GOFs.

David graduated from Johnson State College in Vermont and now works at a community mental health organization. He works with school-aged children with emotional and behavioral problems and is a supervisor at one of the residential facilities in East Montpelier, Vermont.

Anyone who has seen the cars David has restored just has to be impressed. He had no formal training other than that great school of experience. He maintains that the great teacher is getting in over his head and then working his way out of it. He has tackled everything from complete restorations including major engine and body rebuilds to minor maintenance. His work was recognized by the Vermont Automobile Enthusiasts Club with the coveted VAE President’s Restoration Award in 1987 and 2011. His cars always are appreciated wherever they are shown. He continues to show his enthusiasm for The Register by bringing new and fresh ideas for the organization.

The Register is governed by a Board of Directors who serve until they resign. The presiding officer of each local Chapter is entitled to a seat at the Annual Business Meeting with full voting privileges. The Annual Meeting is held in February at a rotating place that is central to a majority of the members and with access to an airport. Any Member wishing to have an item placed on the agenda for consideration at a Board meeting should contact the Chairman two months prior to the meeting date. The Board may meet at other times during the year, as business requires.

In addition to the Board members, a group of Register members volunteer their time to handle the background tasks needed to keep the Register running. You can find those members on the Contacts page.

In 1997 the Register established an endowment to honor Dick Knudson's contributions to the Register and his automobile hobby. After Frank Churchill's death in 1999, Dick encouraged the endowment management to change the scope and name of the program to The Knudson Churchill Scholarship Trust. With the name change a separate Board of Trustees was named and the 501(c)(3) status was obtained. With the new tax exempt status the program was opened to anyone who desired to continue their education in the print journalism or automotive technology fields. Thanks to the generous contributions of our members four scholarships are given each year.

All of the Board and members welcome you, as they did back in 1963, to join The New England MG 'T' Register and become part of the experience. You won't be sorry that you did.